The reason some professionals and novice users shy away from investing in electric chainsaws is they assume that such devices offer short battery life and are not powerful enough to get the job done, but improvements in battery technology have resulted in innovations that have lengthened battery hours and made starting a chainsaw easier. Electric starters for chainsaws have replaced the old pull-to-start system but only in electric chainsaws. This gives electric saws an edge when it comes to safety when starting the machine.

What are the Advantages of Electric Chainsaws?

Without the need for gas, you need not worry about mixing gas and oil. All you must do is plug it into an outlet or charge the battery.

What tasks are electric chainsaws best suited for?

What are the Disadvantages of Electric Chainsaws?

With limited mobility, you may not be able to reach all corners of your yard.

What about Investing in Higher Voltage Batteries?

If you have checked amazon or a retailer near you, you may have noticed that electric chainsaws that feature electronic starters for chainsaw and high voltage batteries are pricier than gas-powered chainsaws that offer the same performance.

Our top pick if you are looking for an electric starter for chainsaw: DeWalt 20 V Max XR Chainsaw 12-inch Tool Only (DCCS620B)

Featuring an electric starter for chainsaw (no pulls), DeWalt’s 20 V Max XR offers you a brushless motor that delivers powerful performance. The twenty volts 5 AMP battery is enough to deliver up to 90 cuts on a four by four. Compact and lightweight, this electric saw is easy to use and perfect for homeowners and carpenters. Low kickback makes it safer, and auto oiling keeps the moving parts lubricated.

Reasons Not to Buy Electric Chainsaws

Unlike the majority of electric chainsaws that feature an electric starter for chainsaw, gas-powered chainsaw starters are affected by temperature, engine flooding, damaged spark plugs, dirty carburetor, and fuel. Because of these issues, starting one can be problematic, especially if you are new to chainsaws.

The solution to this problem is to invest in a gas-powered chainsaw that features an easy start such as the following: 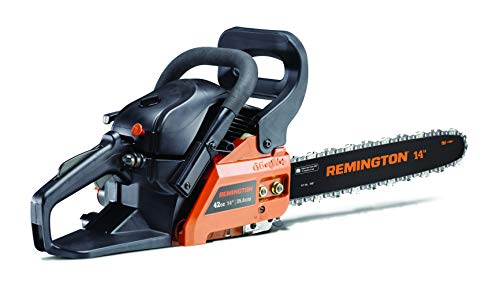 Just like a traditional chainsaw, this model features a pull start system. Note, there are no gas-powered chainsaws that feature an electric starter for  chainsaw. However, the chainsaw linked above is designed for quicker easier pull starts, and the premium fourteen-inch bar and low kickback chains can easily cut through tough wood.

Reasons Not to Buy Gas-Powered Chainsaws

What are the Disadvantages of Gas-powered Chainsaws?

Other disadvantages of gas-powered chainsaws include:

How to Choose Between Electric Chainsaws and Gas Chainsaws

Considering the pros and cons listed above, we can establish that electric chainsaws and gas-powered chainsaw manufacturers design their products for different purposes. The question is, how do I decide what chainsaw to buy?

To answer that question, you must ask yourself the following questions:

What Do You Intend to Use the Chainsaw for?

For felling large trees or heavy-duty lumbering, we suggest investing in gas-powered chainsaws such as the one linked above, however, as mentioned, newer electric chainsaw models have enough power to rival their gas-powered counterparts.

If you intend to start a lawn care business or you need a chainsaw for light yard duty in an urban setting, an electric chainsaw is better suited for that purpose. On the other hand, if you want more mobility and run time, you should go for gas-powered options.

For moderate use, say cutting think branches and logs, pruning, clearing, or cutting firewood, we recommend a chainsaw that has a 16 to 18 inch long cutting bar. There are a few electric models suitable for said tasks. But most chainsaws in this category are gas-powered.

As mentioned, gas-powered chainsaws make a lot of noise when in use. Consequently, if you reside in a densely populated neighborhood and want to avoid noise complaints by neighbors, you should go for electric chainsaws.

If you are not strong, it is safer to invest in a lightweight and easy to maneuver chainsaw. Why? A heavier model will wear you out faster, and you may not be able to handle the kickback.

Remember, chainsaw kickback is the leading cause of chainsaw-related injuries.

Having control over the chainsaw at all times is the primary principle of chainsaw safety. A saw that features an electric starter for chainsaw is safer in that it does not require you to pull to start. A full-throttle start increases the risk factor.

Electric chainsaws are easier to start and their lightweight nature makes them easier to control. Consequently, if you are new to chainsaws, we recommend investing in electric chainsaws. You should also take the following protective measures:

Is an Electric Starter for Chainsaw Worth It?

Considering safety and ease of use, yes, an electric starter for chainsaw is worth it. That is not to say that electric chainsaws are 100% safe. The problem is, just like a gas-powered chainsaw, an electric chainsaw features a sharp spinning chain. That chain if not pointed in the right direction can cause serious damage to the operator.

We recommend electric saws because they feature an electric start for a chainsaw, meaning,  starting the device does not require you to pull.

Is there an electric start chainsaw?

Yes, battery or cord-powered saws feature an electric starter for chainsaw. This feature is beneficial in that it makes starting the saw safer and easier.

Is there a gas chainsaw with an electric start? No, there are no gas-powered chainsaws that feature an electric start. However, after-market versions or modded chainsaws may have this feature, but finding one can be problematic, and performance is not guaranteed. It is also worth noting that modifying your chainsaw voids the warranty.

How to Start a Gas-Powered Chainsaw

If the tool features an electric starter for chainsaw, it is a matter of pointing the blade in the right direction then pulling the trigger. But on occasion, pulling the trigger or pull start does not get the job done. This indicates that there is either a problem with your method or the chainsaw. The question is, how do you weed out the problem?

Note that the performance of your chainsaw is dependent on how well you maintain it. That means storing it in a safe location and routinely performing maintenance checks.

Before you pull the start, you should ensure that (1) the plug boot is fully seated. (2) there is fuel in the tool. (3) the oil level is okay.

That said, there are two ways to start a gas-powered chainsaw -that is- a cold start or a hot start.

How to Cold Start a Gas-Powered Chainsaw

“Cold start” refers to a situation where the chainsaw has not been used in some time or when you purchase a new one. The idea is to get the fuel circulating and the engine warm enough to fire.

Expert tip: if it is your first time using a chainsaw or you bought a new model, read the safety instructions on the manual. Remember, chainsaws are not built the same.

For safety reasons you must ensure that you apply a chain brake whenever you start a gas-powered chainsaw. If you do not, the chain will start rotating as soon as you start the engine. If the blade is not pointed in the right direction. That may result in dire consequences.

Blocking airflow by closing the choke will send a concentrated burst of fuel to the engine making it easier to start.

Does Your Chainsaw Feature a Decompression Valve and Primer Bulb?

If it does, press it to reduce pressure in the engine’s combustion chamber. This will make it easier to start the chainsaw. If your chainsaw does not feature a primer bulb, it will likely have a purge bulb instead. A purge bulb causes the release of excess gas out of the fuel lines.

Now you are ready to pull the starter cord

Before you pull the starter bar, it is vital to ensure that you properly secure the chainsaw and the blade is pointed in the right direction.

How to Hot Start a Gas-Powered Chainsaw

If the chainsaw has been in use, hot starting, as the name suggests, means to start it again. Hot starting a chainsaw is easier because the hotplug will reach the appropriate temperature in less time, furthermore, the choke will not have to remain closed to start the engine.

The steps are like cold starting but with a few differences depending on the chainsaw model you are using. The most important step as mentioned above is to always set the chain brake before starting a chainsaw. Remember, unlike cold starting, when you hot start a chainsaw, fuel is already running in the saw, meaning, it will fire faster and that can be a surprise if the chain brake is not engaged.

After closing the choke and setting the saw to “on” or “run,” the next step is to press the decompression valve to relieve compression built up in the carburetor.

All you have to do next is slowly pull the starter cord until you feel some resistance then pull firmly. It may take several pulls, especially in older chainsaw models.

With no throttle or cord to pull, electric saws feature an electric start for chainsaws that make them easier to start.

Once the device is plugged in or the batteries fully charged, perform the following steps:

However, after disengaging the brake, you must press the safety button, throttle lockout, or trigger lock (same thing, different name on different models).

When you are ready to use the chain, release the safety button and press the trigger.

On the other hand, electric chainsaws feature electric starters for chainsaws making them easier and safer to start. But are unsuitable for heavy-duty lumber work. So we suggest using the information above to help you decide which model is best suited to your needs.

Gas-powered chainsaws do not feature an electric starter for chainsaw; however, the extra power makes them suitable for heavy-duty work. Electric chainsaws feature electric start systems. When deciding what to buy, we recommend considering what you intend to use the chainsaw for, the weight of the product, features, power options, maintenance, and repair/replacement costs.